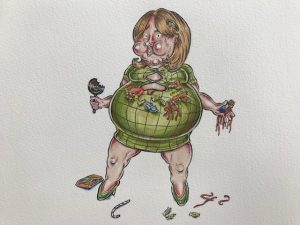 Have you ever heard of Candy School?
To learn by eating is their only rule.
The children lick their lips and drool.
You don’t get sick of Candy School.

They learn to count with sweet love hearts.
And work out fractions with treacle tarts.
Then draw up the data with chocolate bar charts.
And afterwards they eat up all the parts.

PE stands for Popcorn Eating.
They give each child ginormous seating.
It’s only cream they give a beating.
And cookie making is what they compete in.

They tie their shoes with strawberry laces.
Then cut them up and stuff their faces.
You catch them eating in all sorts of places.
You’ll never see them running in any races.

Going to Candy School is a treat.
Every resource is something sweet.
There are no vegetables, fruit or meat.
The more you learn, the more you eat.

Candy School, Candy School, you’re the best.
I’ve tried you out for a week-long test.
Although you’re great, I must confess.
I no longer fit into my dress 🙁